Daughters and Dads Active and Empowered was conceived by Professor Phil Morgan in 2014 in response to alarming statistics about the significant decline in physical activity seen in adolescent girls in Australia and the associated risks to their future physical and psychological health. Additionally, Professor Morgan saw the importance of improving the social and emotional wellbeing of young girls as a protective factor leading into adolescence, with recent Australian statistics identifying widespread self-esteem issues in teenage girls.

Building on his experience developing the international award-winning Healthy Dads, Healthy Kids program and as the father of three girls, Phil knew fathers to be key role models and motivators in girl’s lives:

With generous funding from Port Waratah Coal Services and the Hunter Children's Research Foundation, the Daughters and Dads Active and Empowered program was developed and pilot tested under rigorous randomised controlled trial conditions with 115 families at the University of Newcastle in 2015. The program continues to be delivered in Newcastle with funding from Port Waratah Coal Services.

In 2018, the NSW Minister of Sport, Stuart Ayres MP, announced four years of funding for the state-wide rollout of the Daughters and Dads program in partnership with the NSW Office of Sport. The program is a key initiative of the Office of Sport's 4-year, multi-faceted ‘Her Sport Her Way’ strategy that aims to increase the number of girls and women playing sport across the state.

As part of this grant, Daughters and Dads has been adapted into multiple sport-specific programs, attracting additional ‘legacy’ funding from Women’s World Cups held in New South Wales. In 2020 the first sport-specific program, Daughters & Dads Cricket was developed in collaboration with Cricket NSW and Cricket Australia. Research showed the program was highly effective in boosting girl’s cricket skills and participation. The program is now being rolled out nationally, in partnership with Cricket NSW, Cricket Victoria, the South Australia Cricket Association and the Western Australia Cricket Association. In 2021 Daughters & Dads Basketball was first delivered in collaboration with Basketball NSW, with growing numbers of attendees in 2022. Daughters & Dads Football is currently being developed in partnership with Football Northern NSW and Football NSW, ready for pilot in Term 4, 2022 and scale up in 2023. In 2022 Gymnastics NSW also began successfully delivering the classic Daughters and Dads program across the state.

In an international collaboration starting in 2019, the University of Newcastle partnered with Women in Sport-UK to deliver the Daughters and Dads Active and Empowered program in the UK. Women in Sport-UK received $1 million from Sport England to deliver the program over a three-year period (2019-2021), targeting families from lower socio-economic groups. You can read more about the program’s incredible impact on our International page. In 2022 Daughters and Dads was also adapted and delivered in Vienna, Austria, with plans to scale up the program across Austria in 2023.

Since launching in 2015, over 2700 Daughters & Dads have attended the program and over 370 educators have been trained as accredited program facilitators.

The University of Newcastle team are excited for a future of sharing the substantial health and wellbeing benefits of the Daughters and Dads program to families locally, nationally and globally. 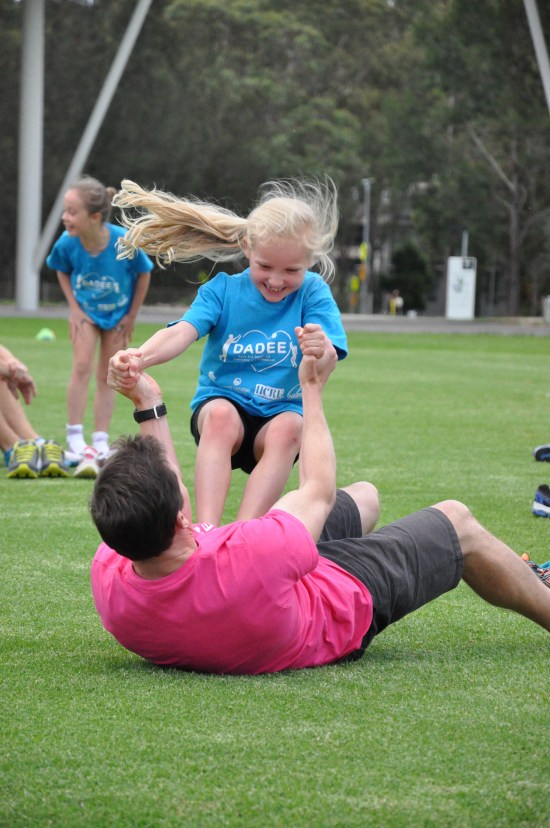